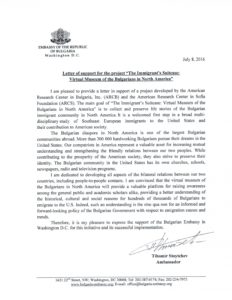 Letter of support for the project “The Immigrant’s Suitcase: Virtual Museum of the Bulgarians in North America”

I am pleased to provide a letter in support of a project developed by the American Research Center in Bulgaria, Inc. (ARCB) and the American Research Center in Sofia Foundation (ARCS). The main goal of “The Immigrant’s Suitcase: Virtual Museum of the Bulgarians in North America” is to collect and preserve life stories of the Bulgarian immigrant community in North America. It is a welcomed first step in a broad multi­ disciplinary study of Southeast European immigrants to the United States and their contribution to American society.

The Bulgarian diaspora in North America is one of the largest Bulgarian communities abroad. More than 300 000 hardworking Bulgarians pursue their dreams in the United States. Our compatriots in America represent a valuable asset for increasing mutual understanding and strengthening the friendly relations between our two peoples. While contributing to the prosperity of the American society, they also strive to preserve their identity. The Bulgarian community in the United States has its own churches, schools, newspapers, radio and television programs.

I am dedicated to developing all aspects of the bilateral relations between our two countries, including people-to-people contacts. I am convinced that the virtual museum of the Bulgarians in North America will provide a valuable platform for raising awareness among the general public and academic scholars alike, providing a better understanding of the historical, cultural and social reasons for hundreds of thousands of Bulgarians to emigrate to the U.S. Indeed, such an understanding is the sine qua non for an informed and forward-looking policy of the Bulgarian Government with respect to emigration causes and trends.

Therefore, it is my pleasure to express the support of the Bulgarian Embassy in Washington D.C. for this initiative and its successful implementation.

Letter of Support from Mr. Simeon Stoilov, Consul General of the Republic of Bulgaria in Chicago between 2011-2015 Bulgarian Art in Chicago/2017 Virtual Exhibit

Letter of Support from Mr. Simeon Stoilov, Consul General of the Republic of Bulgaria in Chicago between 2011-2015

The Virtual Museum Presented at the 48th ASEEES Annual Convention