The “Immigrant’s Suitcase: Virtual Museum of the Bulgarians in North America” held its first fundraising event on December 3, 2016. The format of the gathering, which was organized by the American Research Center in Sofia for the benefit of the virtual museum, was peculiar. The target audience for the fundraiser was the community of Bulgarian women living in Chicago, and the goal of the event was not only to advertise and fundraise for the virtual museum, but also to give the Bulgarian women in Chicago an opportunity to create social networks and promote their businesses and services.

One of the major sponsors of the party was Bon Appetit Bio Catering, a company that donated the delicious food (in a total valued amount of $1,000) for the event. The food was elegantly decorated and consisted only of meals, salads, appetizers prepared with organic ingredients. All the funds that the buffet table gathered at the event were donated to the virtual museum. The other major sponsor of the event was Elena Aleksiev, who donated light spa treatment gifts for raffle prizes and hand-made jewelry for the bazaar at the event. Additionally, she initiated the idea of the fundraiser and contributed to a great extent to its organization and accomplishment. 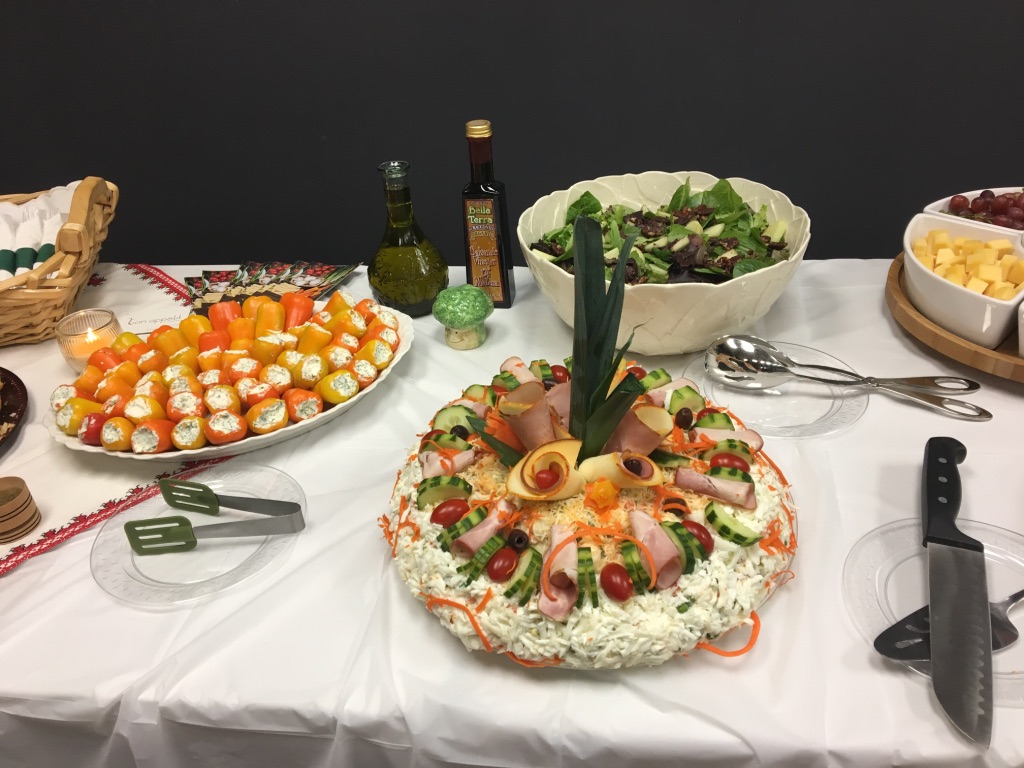 Since the goal of the party was to gather Bulgarian attendees for informal conversation, relaxation, and fun, it included coffee and tarot readings as part of its activities. Ilina Sirakova, the ethnographer and former curator of the Rousse Regional Museum of History, who has been doing an ethnological research on the topic of coffee and tarot readings, was able to look at the shapes of the coffee and the order of the tarot cards of some of the guests and, based on what she saw, discuss the past and the future of the women. All the funds that she was able to gather at her “Magic” station were donated to the virtual museum. The aura reading center at the event was the next station that attracted the audience’s attention. With special technical equipment, the yoga instructor Emil Marinov, the only man at the party, assessed the health and mental condition of the female attendees.

The event also included a small bazaar of jewelry and knitted hats and scarves created by the Bulgarian women Desislava Tiholova, Elena Aleksiev, and Ivanka Staneva, and 50% of the funds from the sale of these products were donated to the virtual museum. Meanwhile, the Bulgarian Museum in Chicago, with its president Elena Tabakova, organized a small corner exhibition of urban women’s clothing with hats and a dresses. The funds raised from having a picture taken with a retro hat from the small exhibit were also donated to the cause of the digital museum. A small auction was also held of art pieces by Kina Bagovska, who donated a painting, and Ivaylo Ivanov, who donated a handmade pipe for the purpose of the auction. Of special help in the organization of the event were Diana Ivanov, who was responsible for the raffle and registration of the event, the professional photographer Mira Koleva, and the hosts: Magura Bulgarian Collective Space, Valentina Limov, and Nadia Spassov. 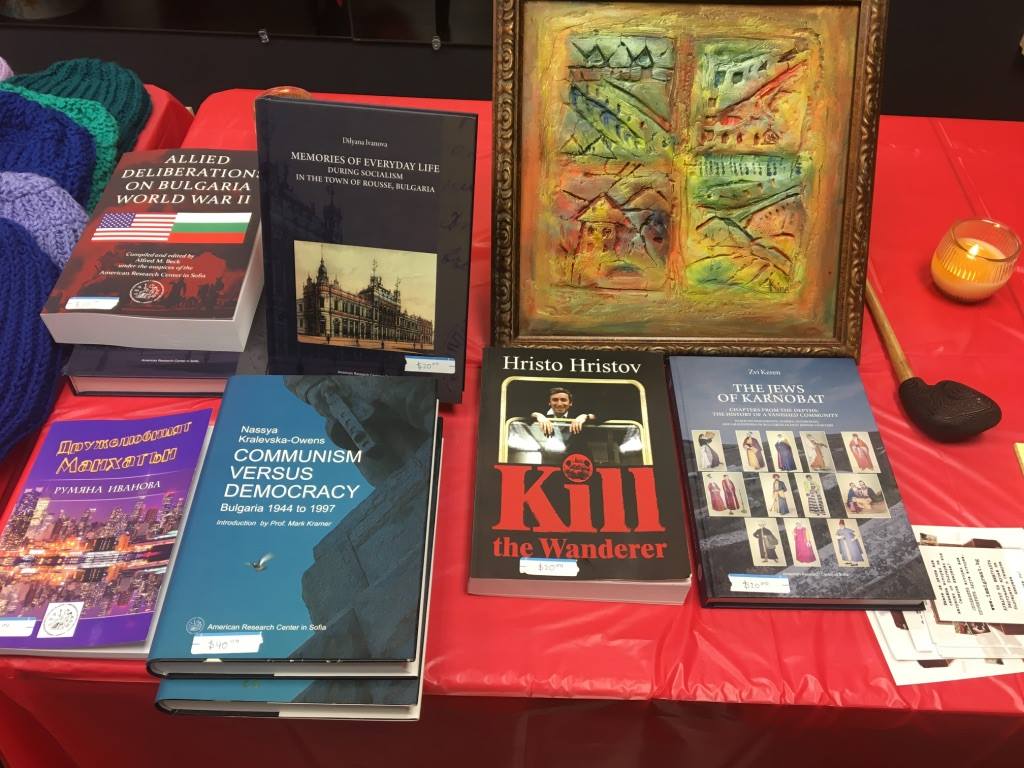 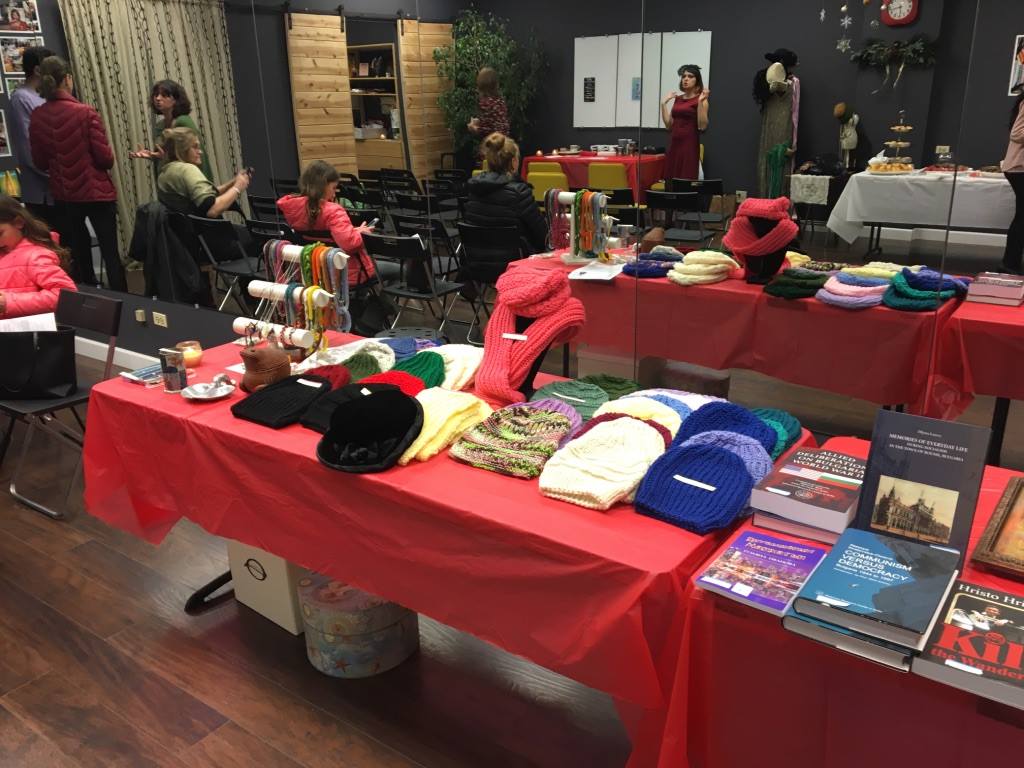 The party was opened by Dilyana Ivanova from the American Research Center in Sofia, the main organizer of the event and the creator and manager of the virtual museum. After she expressed her gratitude to everyone who helped with the organization of the party, she discussed briefly the history and achievements of the virtual museum project so far. Dilyana emphasized that the virtual museum aims to provide the means for Bulgarians – and also for the Bulgarian women in the U.S. and Canada – to promote themselves. She explained that the mission of the project is to create venues for the Bulgarian diaspora in North America to present their businesses, services, stories of immigration, and achievements, and to communicate with other immigrants and the American community at large. Dilyana gave the floor over to presentations from women who have businesses and services in Chicago, and by doing this she allowed the audience to become part of the presentation at the event and to demonstrate to them the power of this type of gathering for the good not only of the virtual museum, but also for the Bulgarian women and the broader community in general.

The American Research Center in Sofia greatly appreciates the contributions and efforts of all the people mentioned above. ARCS also would like to share its gratitude for the audience at the party, for all the ladies who donated to the cause of the Virtual Museum of the Bulgarians in North America and who helped to make this project and its development possible. ARCS is especially thankful to the women who contributed more than $100 dollars, including Vania Zdravkova and Rayna Zankov. As a result of the Magic and Beauty Party, the virtual museum received more than $1,000 (after the expenses of organizing the event). This money will be dedicated to enhancing the virtual museum, and later we will publish a report of expenditure on the virtual museum website.

The event was an enormous success for “The Immigrant’s Suitcase.” It will become one of the happy stories of the online museum, a story of community trust and support of the identity and culture of the immigrant diaspora of the Bulgarians in North America. The American Research Center in Sofia is optimistic that with such community support, the Virtual Museum of the Bulgarians in North America will be able to accomplish its goals of promoting Bulgarian culture abroad and strengthening the Bulgarian-American ties in general. Another beautiful and magical party will be considered for the coming year, possibly to be scheduled around the international women’s day, March 8. All the friends of “The immigrant’s Suitcase” are invited to join us once again! Join us in becoming part of the history of the Bulgarians abroad!

The Virtual Museum Presented at the 48th ASEEES Annual Convention Letter of Support from Mr. Simeon Stoilov, Consul General of the Republic of Bulgaria in Chicago between 2011-2015